Note: A number of the sources I cite are from ProQuest.  If you don’t have access to them, email me or check this link.  I can get you pdf copies.  As always, feel free to contact me or comment for further discussion!

After 9/11, Americans universally sought to explain terrorism.  We explored the involvement of religion and ascribed jihad as the driving factor behind the actions of al Qaeda and its ilk.  Now, the difficult dynamic for consideration is in attempting to consider perspective.  If we try to look at the context of jihad, parts of it make sense.  Certain actions taken by extremists have positive intentions and consequences that aren’t apparent from an opposing viewpoint.  So what of the opposite situation?  Eco-terrorists, like some of those involved with Greenpeace and Earth First, take extreme, destructive action to make a statement about environmental protection and conservation.  Such statements are fantastic, but are all of their intentions?  More importantly, how is our perception of them flawed?  As I read Edward Abbey’s The Monkey Wrench Gang, I shall try to understand!

The essential premise espoused by The Monkey Wrench Gang is of a group of individuals with different connections to the environment and different backgrounds in eco-terrorism or activism.

Dr. A. K. Sarvis – a surgeon with some rather questionable morals whose resources and lightweight insanity

initially draw him towards smaller acts of Eco-terrorism, like cutting down billboards. Upon the formation of the team, he becomes the main financial provider.

Sgt. George W. Hayduke – one of the stranger characters, an outdoor adventure guide.  Though his direct connection (perhaps emotional, too, in some sense) to the environment is very apparent from this occupation, he’s a very messed up person.

He displays a variety of psychopathic and nihilistic tendencies which seem to drive his actions more than any sort of well-thought-out concern for the environment.

Capt. Joseph “Seldom Seen” Smith – yet another rather extreme, archetypal character, Smith represents more societal problems and individual flaws.  He doesn’t stand by the essential values of his Mormon faith very well, and his primary interaction with nature is recreational.  He has all kinds of memories associated with different places, which also drive his protectionism towards them and lack of concern for those he negatively impacts.

Ms. Bonnie Abbzug – closing out our collection of strange collaborators on Abbey’s fictional example of eco-

terrorism is Dr. Sarvis’ mistress.  Heavily recreationally involved with the wilderness through camping, backpacking, rafting, etc., Abbzug’s activism is primarily driven by Dr. Sarvis’ encouragement.  Like Sarvis, she is wary of Hayduke’s insistence for ever more extreme action.

From here on out, I hope to work chronologically, in part because I am completing this as I finish reading the book. 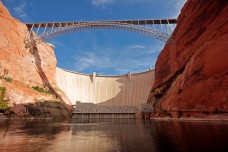 A discussion of the Gang’s intentions is initially provided in the introduction, which also preliminarily names their ultimate goal: the destruction of Glen Canyon Dam (a real place along the Colorado River!).  Through the destruction of a new bridge across Glen Canyon, they succeed in making their statement that it was simply the change being made by others that violated their own values, no matter the immense damage done through their own actions.  The group also introduces its resilience to negotiation leading up to their final action, with the goal of restoring their “home” to its natural state.

Before I move on to the details of this form of disobedience, I want to briefly introduce a real-life parallel.  In

an LA Times article titled “Monkey-Wrench Gang Sequel Earth First! Just Rude, Not Violent, in Attempts to Stop Local Projects,” Jeffrey A. Perlman introduces some of the more extreme actions of Craig Beneville and Mike Scott, early members of extreme environmental activist group Earth First! in Orange County, California.  Of course, the title opens with the statement that these actions aren’t violent in the same destructive sense (whether in the form of the destruction of bridges or the sabotage of construction equipment) as those described in The Monkey Wrench Gang.  However, they fulfill the same sense of action simply for the sake of statement, ignorant of impact.  “At another [Orange County tollway agency] board meeting, they dumped cow dung in the aisles” (Perlman).

The idea of rudeness that Perlman uses to describe Beneville’s and Scott’s styles of activism are quite similar to the Abbey’s characters, particularly Hayduke.  Perhaps the best explanation of this is a conversation between him, Smith, and Doc Sarvis regarding litter.

What makes this more distanced, fictional statement even more meaningful is a quote on civil disobedience by Greenbelt member Elisabeth Brown in Perlman’s aforementioned article: “We commonly think of it as people laying down in front of a bulldozer, or chaining themselves to something… But a developer who destroys some sage scrub on purpose or who grades some land without a permit is also civil disobedience.”

So the intention of the civil disobedience being enacted by such groups as Earth First was to counteract opposing civil disobedience, on the part of those responsible for development, construction, and other methods of impacting nature for human causes.  The core philosophy behind them, then, must have been a definition of “civil obedience.” In an article on Lowbagger.com titled “Earth First! A Founder’s Story,” Earth First co-founder Howie Wolke alludes to Aldo Leopold’s work as a basis for what he and his colleagues saw as the true environmentalist values that modern organizations, such as the Sierra Club, had lost.  The central component of Leopold’s work is the idea of a Land Ethic: responsibility people hold to the environment because of the benefit it poses for them.

As Wolke continues to describe the inspiration Rachael Carson’s Silent Springprovided for Earth First, he makes reference to the overarching theme of wilderness consideration that has inspired my personal view regarding this topic.  Before I begin to examine this more deeply, if you would like to gather my context, read this piece: The Trouble with Wilderness by William Cronon.  I, of course, have Dr. Olsen and Mr. Uzwack to thank for introducing the Experience: Arches National Park class in which I participated to this groundbreaking work, but it provides an essential analysis (arguable, of course, as demonstrated by a number of subsequent works we’ve read) of the concept of wilderness.

Here’s what Wolke says: “wildland conservation was subsumed by a bigger, rapidly growing environmental movement that appeared to have more immediate relevance to urban America.”  Now, to establish said context, it is necessary to define wilderness and provide an appropriate contrast with Wolke’s “wildland.”  As Cronon defines it, it is a societal construct that encompasses land “preserved” for the sake of recreation and justification of further exploitation of natural resources elsewhere.  It has the seeming appearance of being isolated from human impact, but this is simply an illusion.  Wolke argues that this is the concept of wilderness that environmentalists at the time (during the 1960s and 70s) believed in protecting.  Cognizant of the hypocrisy in this, he harkened back to the idea of nature discussed by Leopold and Cronon: something that is all-encompassing; something with which human interaction is inevitable; something which we, as humans, have a responsibility to respect, even in its minutest forms around us in daily life.  This is why Earth First and the crew in The Monkey Wrench Gang focus their actions on minimizing large-scale destructive impact by others on land (through persistent use or roads resulting in air pollution, noise pollution, light pollution, the whole lot, etc.), but not on minimal, individual actions as one would expect most environmentalists to.  They are not the WWF, or the Washington Environmental Council, nor are they you or me (assuming you’re in a similar place as me where positive environmental impact means not littering and planting native species in parks).  They believe in a greater cause and commit themselves to it.

Ok… I got kind of lost in my own train of thought there and got somewhere, but there are a few important notes to make…

First off, an important note by Wolke in the above article is that The Monkey Wrench Gang “wasn’t a primary impetus in the founding [of Earth First], despite media reports to the contrary.”  So, while its characters may embody the ideals held by the neo-environmentalists that Earth First and their like were (and in the way they pushed the rest of the movement to be, if you read more of Wolke’s article), The Monkey Wrench Gang certainly doesn’t set a standard for real life based on the sheer crudeness and extremism of its characters’ actions.

However, in thinking of The Monkey Wrench Gang as representative of reality, at least one more parallel is essential to consider.  In a 1996 interview for Denver Post, Jim Carrier heard about the life and adventures of Edward Abbey and his environmental activist friends from the supposed inspiration for Seldom Seen Smith, Ken Sleight.  To begin with, Carrier includes a length quote of Seldom Seen which describes more essential background for understanding both his and Hayduke’s intentions.

“You know and I know what it was like here, before them bastards from Washington moved in and ruined it all. You remember the river, how fat and golden it was in June, when the big runoff come down from the Rockies? Remember the crick that come down through Bridge Canyon and Forbidden Canyon, how green and cool and clear it was? Remember the cataracts in Forty-Mile Canyon? Well, they flooded out about half of them. And part of the Escalante’s gone now” (qtd. Carrier).

The idea argued by Seldom Seen is made even more impactful by Sleight’s statement on the same topic.  While he certainly was an activist, he was not admittedly a “monkey-wrencher” (though his answer regarding that in the above interview should be left up to the reader’s interpretation).  The inspiration he provided for Seldom Seen was rooted in his ideas: “Glen Canyon sure made an environmentalist out of me, because you don’t destroy the very thing that people come to see. That was tragic… look what the government did just by building Glen Canyon Dam. Lots of beautiful things went under. It ruined a hell of a big ecosystem… those who destroyed Glen Canyon never served a day” (Carrier).  Of course there was some connection to the idea of nature and the importance of nature and a responsibility to nature (a land ethic), but the connection was personal.  When Glen Canyon was dammed, prompting the opposition which the characters of The Monkey Wrench Gang and the early members of Earth First! embody, the memories which defined part of these individuals’ identities were destroyed.  So much more than an environmental responsibility, they feel an obligation (or perhaps simply a strong desire) to restore the land, the formations, the ecosystems, to the form which had personal significance to them in the past.  They act in the same thread as any conservative aiming to preserve the past they love.  Maybe their intentions are just those of ordinary people.

An excellent closing thought is found in an Abbey quote embedded within this quote of Earth First! founder Dave Foreman from an article by The Washington Post’s John Lancaster about Foreman’s ideology: “`Be a halfhearted zealot, a part-time fanatic’ … I really think fanatics who can’t laugh at themselves are dangerous, and I look at the Fortune 500 as an example of that.”  It isn’t necessarily a bad thing that the characters of The Monkey Wrench Gang and the early members of Earth First! are/were rude and crude and blunt and hedonist (in a certain sense).  It is simply a component in their way of achieving their goals in a way that doesn’t require giving up on the seemingly worthwhile parts of life.