After a long day of flying from Sea-Tac to Heathrow through Toronto, we arrived in London near 9:00 AM. Of course, the time difference meant that we were arriving in the middle of our night, so waiting in line for an hour at the British Border was hell. Despite my picture of London as a fancy, posh place, Heathrow wasn’t all that nice of an airport. It most reminded me of the New Delhi airport, though after the recent renovations, I hear that it is nice on the scale of Amsterdam or JFK. Secondly, being the person that I am, I spent the entire forty minute ride into Covent Gardens, where we’re staying, observing the interesting cars that lined the highway. It was quite exciting to see all the cars that Top Gear talks about that aren’t sold in the US. Of course, most of these are small, gas prices being as high as they are (I heard somewhere between $9-$12 a gallon [do remember that neither of those units are used here in England]: to think we complain about prices above $4 in the States!). Just like

New York, though, taxis are everywhere. The London Taxis are uniquely taxis, though, not Ford Crown Victorias, Toyota Prii, or Nissan NV200 (the upcoming electric official NYC taxis). See the picture to the right. Despite the popularity of these, the public transportation system in London is fantastic. It includes buses (double-deckers that are everywhere!), the Underground subway system, Riverboats, the National Rail Network and even bicycles that can be rented from Smart-Kart-esque stands at various street corners.

It was great to freshen up at the condo and have a lunch of delicious sandwiches at Pret a Manger, but we quickly headed out to ride on the London Eye. Walking there took us on Parliament Street, allowing me to see Scotland Yard, 1 Downing Street,

Westminster Abbey, the Big Ben and the Houses of Parliament for the first time. While all these buildings are quite impressive, my enjoyment came from other sources. Anyone who was in EPS’ Class of 2015 in 8th grade will remember the picture on the

right (think Vibhu). Those types of telephone booths are everywhere, though it seems there main purpose in the age of cell phones is to challenge teenagers to fit as many people in as possible.

My other source of entertainment was enjoyably mocking various uniquely British terms, such as “diversion” (detour) and “till” (counter).

On the left here is Trafalgar Square. The day we first visited this square with its Nelson’s Column honoring Admiral Horatio Nelson, who died in the Battle of Trafalgar in 1805, was Saturday, April 7th, or National Pillow Fight Day in China. Thus, we were witness to the annual Trafalgar Square Pillow Fight in front of the National Gallery.

government resistance against the rebels in Syria by friends and family of Syrians. I didn’t take any extremely great photos so as to respect the protestors.

Finally, in the moments before arriving at the London Eye, we had to cross a bridge over the Thames that I will always remember as the Bridge of Stupidity, though its official name is Westminster Bridge. Just as how at baseball games at Safeco Field there’s the game on the big screen where there are three or four baseball caps that are moved around while a ball is covered by one of them, several vendors have set up a similar game with small cups and a ball along Westminster Bridge. They accept a bid, with a minimum of £20, and will return double your bid should you guess correctly. For some reason or another, though we discouraged him, my dad decided to try his hand at it and bet £40 (~$60). He lost all of it. Our annoyance following convinced him to promise not to do it again. 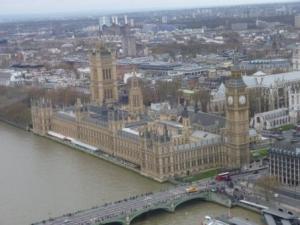 House of Commons from London Eye

Fortunately, we had booked tickets for the London Eye online from our apartment, do the line to pick up tickets was very short for us. The line for the ride itself moved quite quickly. Despite its obvious intention to be a tourist attraction, the views from it were actually fabulous. While seeing the various buildings of London is delightful, seeing them from above (and not in Google Maps) is quite striking as well. Partially as an advertisement for Samsung, but also as a useful tool, EDF Energy (the company that operates the ferris wheel) has installed Samsung Galaxy Tablets around the cars that run a map that mirrors the view from the car. In several languages, it offered a description of many of the landmarks and buildings in the view, which changed as the car climbed. If a tourist has a Samsung Android device, whether it be a phone or tablet, they can download the app on there and use it in the same way. It was just released with this augmented reality feature, and will be available for non-Samsung devices (iPhone, too, I hope) within the next few months.

Tickets for the ferris wheel also include a five minute 4D movie. As impressive as the 4D was, the movie made no sense (somehow being about the London Eye). Oh well. It was fun anyways. The rest of the day was fairly uneventful. We ate dinner at Bella Italia in Leicester Square and visited the huge M&M’s World store there.