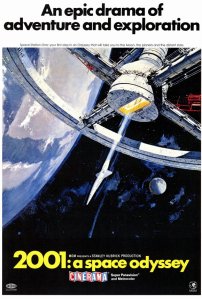 The Hero’s Journey has been a theme in storytelling since the very beginnings of history.  However, in modern film, the most obvious demonstration, especially after a reading of Christopher Vogler’s A Practical Guide to Joseph Cambell’s A Hero with a Thousand Faces, of this mythological storyline, is Star Wars.  Star Wars has all the clear steps of this journey, and has clear characters, as well, that directly relate to how the Hero’s Journey plays out.  In Star Wars: A Myth for Our Time, Andrew Gordon points out on behalf of George Lucas that much of the inspiration for the science fiction in Star Wars was Flash Gordon, and other science fiction novels.  However, from the perspective of others, Star Wars would never have made it if it hadn’t been for one of the greatest films, specifically sci-fi films, of all time, 2001: A Space Odyssey.  2001 set forth a basis for the science fiction genre of film, and it opened up the world’s eyes to a new focus on a technology based future that could extend well beyond the reaches of our world.  Though its hero doesn’t go on as epic a mission as Luke Skywalker in Star Wars, the battle that he fights with his ship’s computer is one that has symbolism well beyond that of Star Wars, and in fact, most science fiction movies of the time.

The first part of 2001, has absolutely nothing to do with the space setting that immediately comes to mind today with the phrase “space odyssey.”  However, it in fact begins the story of evolution that is crucial to the Hero’s Journey, especially the stages “the Road Back” and “the Resurrection,” with the beginning of the use of weapons, specifically to target others (as the conflict between Hal and the astronauts will later show). The astronaut Dave Bowen’s Hero’s Journey begins in the ordinary world of the Discovery One spaceship.  The first scene on board shows Dave and his partner astronaut, Frank Poole, eating a meal while watching an interview of themselves and the HAL9000 computer that controls their ship.  The fact that they believe HAL’s statement in the BBC program that a 9000 series computer has never made a mistake and that they trust him (I will refer to HAL as a person, due to his unique personality) so much that Dave shares his sketches of the hibernating crew members with him indicates that the astronauts are completely unaware of the problem that will later create their ordeal: that HAL is developing a personality that is destructive to them.

The initial call to adventure comes to the astronauts when HAL tells Dave that the AE-35 unit on the outside of the Discovery is malfunctioning and is sure to fail within three days.  Dave talks with Mission Control, and goes out in a pod to fix the unit.  When he returns, he and Frank scan the AE-35, but don’t find anything wrong with it.  Neither does mission control, which has a twin of HAL.  This is when both the astronauts truly begin to understand the problem.  They then cross the threshold by committing to make a change to what they are doing.  They commit to the plan that if HAL’s prediction about the AE-35 unit failing proves to be wrong, they will disconnect him.

The two astronauts decide to experiment with these new conditions by sending Frank back out of the Discovery in a pod.  Unfortunately, HAL was able to read Frank and Dave’s lips, and thus begins to plot against the astronauts in self-defense.  Thus, the astronauts have gained their first enemy.  While Frank is outside of the pod, HAL takes control of it, and has it sever Frank’s connection to it (including his oxygen source).  Dave immediately responds by running to the pod bay, and disembarking in another pod to try to save Frank.  Thus begins Dave’s approach to his Ordeal.

After Dave grabs ahold of Frank with the pod, he tells HAL to open the doors to the pod bay again to let him in.  HAL doesn’t listen, and instead argues that disconnecting him would threaten the entire mission.  Dave realizes that his only chance of reentry is the emergency hatch.  Yet as he approaches it, he is reminded by HAL that he doesn’t have a space helmet on.  Thus he must prepare himself for a fate unknown to both him and the audience of the time: a major change.

In the second before Dave faces his ordeal of being thrust without a space helmet through space between him and the oxygen filled spaceship, he makes an expression that perfectly represents the fear and anger that he feels both of what he must do to make it back to the ship, and for HAL, as well as his pure determination to do what no one has done before, and get his reward.  He feels that no matter what he does, he could die.  If he stays in the pod, he will eventually run out of oxygen and food.  If he went outside of the pod without a space helmet, his head might explode, according to an urban myth that still exists today.  The hero faces the climax of his journey, and of course, being the hero, survives.

Dave’s reward comes not only in surviving, but in taking up the responsibility and the consequences of his “new life” on board the ship.  It could be thought that Dave’s disconnecting of HAL is his “Road Back,” but it is only once HAL is fully disconnected that Dave feels like he has been rewarded with his freedom from slavery to a computer.  This was his first challenge after his ordeal, but a second comes when the video of Dr. Heyward Floyd (from the earlier part of the movie) appears on a screen in the access compartment where HAL’s crystal memory center is located.  Dr. Floyd tells Dave what the original purpose of his mission was, and Dave takes it upon himself, as he continues his road back, to complete this mission.

Once Dave leaves the Discovery in his pod, he is sucked into a wormhole.  A scene full of hallucinations transports the audience (and Dave) to an alternate dimension, where Dave steadily sees himself aging, with many different versions of himself.  The final “Dave” is bedridden, and as he stares into the black monolith that is identical to those seen earlier in the movie, he reappears as a fetus in a sack floating in space near Earth: the Star Child.  In its true and total form, this is Resurrection.  While Luke Skywalker in Star Wars is “resurrected” as he faces the final danger and mastery of the Force, he is not literally made into a new being as Dave is.  The last minute danger he faces is more of an internal danger: fear.  He doesn’t recognize the room to which he is transported, and even less does he feel that it is in any way normal.

Dave’s “Return with the Elixir” doesn’t bring him back to society, as the plot doesn’t start with him coming from society.  Rather, his return is to space, where he is the mysterious Star Child, who is the new, reborn version of his aging self that he saw in the wormhole.  His return to his home (according to the audience) is rife with experience of what no other human being has experienced: a wormhole.

The myth of 2001: A Space Odyssey is first of all, one that is definitely reminiscent of past myths, especially one that is referenced in the title: Homer’s The Odyssey.  Both Dave and Odysseus have enemies (the Cyclops, Poseidon, and Penelope’s suitors for Odysseus, HAL9000 for Dave).  Both of the heroes have a quest to return home safely, and both achieve their goal to an extent: Odysseus fully and Dave metaphorically since he makes it to a higher universe.  However, beyond bringing back themes from history, 2001 also set forth a myth of its own.  It foreshadowed to the future, a mythological idea for what could be that still exists today, after 2001.  It created a new medium for myths to take place in.  While past myths and stories took place in a fantastical world with monsters and magic, the space age brought a desire for space as a setting, of technology, that people both feared and revered, as both enemies and allies.  It introduced a concept of using a true possibility as a plot, because a true possibility was extremely attractive to the audience, especially one that hoped to see it develop in their lifetime.  The other main feared element is that of aliens.  Many modern movies use aliens, but few in the way that 2001 does.  In 2001, the watcher never actually sees any aliens, only their effect: the monoliths.  This was perfect for an audience that watched the movie to get a kick out of it.  It allowed their hallucinogenic minds to create the unknown for them, and in that, build their own myth.  2001: A Space Odyssey will be remembered for many years to come as an example of the beliefs of the 1960s, and their image of the future.